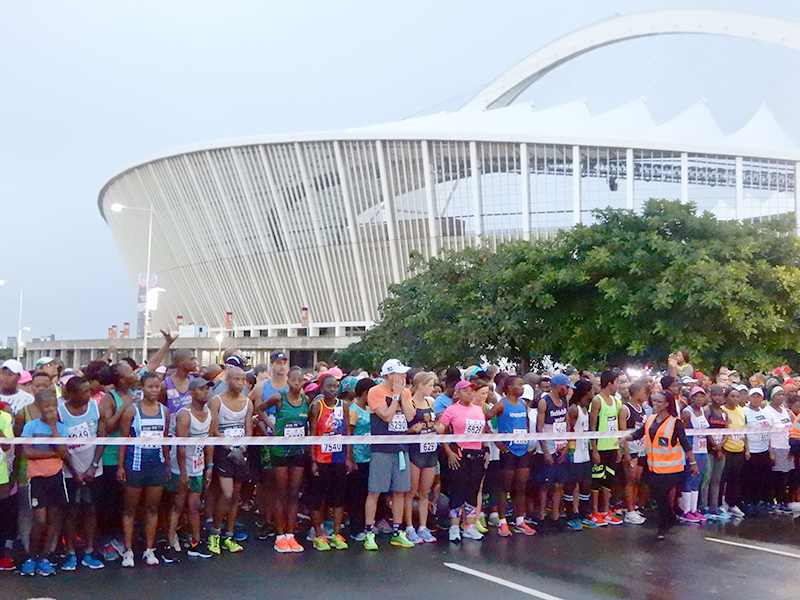 THE 2019 Durban City Marathon looks like providing spectators with some thrilling, fast-paced action on the beachfront with the incentive prizes in all distances in danger of being claimed by a sprinkling of South Africa’s top talent.

Sunday’s (April 7) event caters for runners in the 42, 21 and 10km distances and while a large portion of the 6 000-strong field may be taking part with an eye on June 9, there is a healthy group of runners who will be targeting the generous time incentives.

The flat sea-level course is being touted as potentially one of the fastest marathon courses in the country which has led to a big entry of Comrades hopefuls aiming to set qualifying and seeding times over the two lap route.

However, the interest will be focused up front where the barcode-thin racers will also be chasing time at a significantly faster speed in the hopes of claiming part of the almost R200 000 prize and incentive fund.

The big incentive is in the 42km marathon where the race winner can add an extra R20 000 to the R10 000 first prize if he or she dips under the two-hour 14-minute (for men) or two-hour 35-minute (for women) incentive times.

Among the early entries, last year’ marathon winner Sibusiso Nzima is the favourite to claim a repeat win as well as pick up the R20 000 bonus. Last year Nedbank teammates Nzima and Melly Kennedy battled for the entire 42km distance before Nzima was able to edge to a narrow two-second victory.

Nzima’s time of 2:17:53 is proof enough that with the cool, virtually windless weather conditions predicted for the race, he could dip under the 2:14 needed to turn the winners’ cheque into a R30 000 payday.

Early entries indicate the 21km is going to be the most closely fought battle of the day with an intriguing three-way battle predicted.

Elroy Gelant, one of the country’s top long-distance track athletes who has recently converted his track speed into success on the road, has got to be the favourite. Galant holds the South African record of 13:04,88 for 5 000m, a mark he set in 2016.

The talented 32-year-old has beaten the Durban City Marathon’s incentive time of 64 minutes for the 21km at least once every year since 2012, and last year was able to dip under 63 minutes three times. With a personal best of 61:10 the experienced veteran is going to be very hard to beat, and anybody who does get the better of Galant is surely going to at least be in contention for the win with the incentive.

Galant’s biggest challenge could come in a battle of the ages against young Mbuleli Mathanga. The exciting “new kid on the block” recently broke the KZN 10 000m record with a time of 28:37 and missed lowering the provincial 5 000m record by just a couple of seconds.

On the road, Mathanga has already collected wins in the Deloitte 10km, Nongoma 10km and Willies Mchunu 10km, all with sub-30min times. The youngster has yet to prove his credentials over 21km but it is surely just a matter of time before he collects a big win over the half-marathon distance – and Sunday may provide that opportunity.

While the two South Africans are going head to head, they will also need to be wary of Lesotho’s Nkhabutlane Motlokoa. The 35-year old is better known as a marathon runner and has recorded a sub-2:10 time for the 42km distance in Paris in 2017, while also running a 2:10 time when finishing fourth in Rome last year.

In the 10km, Sipho Mbanjwa looks likely to be the man to beat. Mbanjwa won last month’s Deloitte half marathon in a quick 64:58 and has regularly dipped under 30 minutes for 10km on the road. However, if Mbanjwa wants to grab the R3 500 incentive for going under 29 minutes over the 10km he is going to have to improve on his personal best by five seconds.

The women’s 10km could also provide some fireworks with Mamorallo Tjoka boasting a personal best of 34:04 while Jenna Challenor, a top ten finisher in the 2018 Durban City Marathon, has a PB just 23 seconds slower which should ensure a tight battle between the pair.

So far just over 5 000 pre-entries have been received with the race organisers, Phantane AC, expecting a further influx of late entries on Friday and Saturday.

The 42km route is a two-lap course from the Moses Mabhida / King’s Park Athletics Stadium area, along the beachfront to uShaka Marine World, and back through the city to the King’s Park sporting hub. The 21km race will be the same route over one lap, while the 10km runners will head north and cross the Umgeni River into Durban North and back.